life on the trail of tears 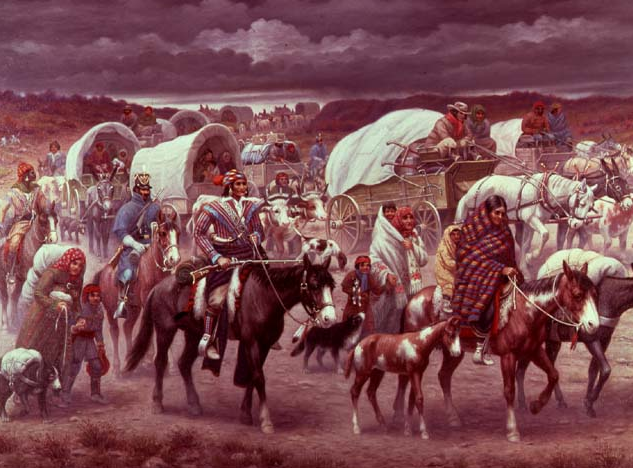 This picture, The Trail of Tears, was painted by Robert Lindneux in 1942. It commemorates the suffering of the Cherokee people under forced removal. If any depictions of the "Trail of Tears" were created at the time of the march, they have not survived. Image Credit: The Granger Collection, New York

What was The Trail of Tears?

Where did the Native Americans live and Where were they forced to go?

The Cherokee historically settled in the Southeastern United States (principally Georgia, North Carolina, South Carolina and East Tennessee.  The Choctaw were originally from modern-day Mississippi, Florida, Alabama and Louisiana. The Chickasaw were are an indigenous people of the Southeastern Woodlands. Their traditional territory was in the Southeastern United States of Mississippi, Alabama, and Tennessee. The Creek Indians lived in Florida, Georgia, Alabama, and North Carolina and the Seminoles lived primarily in Florida.  They were forced to move westward into "The Indian Territory", what is now called Oklahoma.


What kind of conditions did the Native Americans face on the Trail of Tears?

In the winters on the trail, it was too cold to hunt for buffalo and deer so the people on the trail had two cups of hot water, corn bread and only one turnip per day! As a result many people starved to death because they could not keep up the proper body weight to be healthy. During the winters the tribes only had what ever they brought with them to wear. But that would not be enough for them to wear, as many of them died from the cold winter. During the summer the military men (soldiers) would go out into the open and kill a buffalo or a deer for the men to eat. However, during the winter it was too cold to hunt and unlike in a Native American village, where you would store the food for the winter, they were always moving and constantly walking . The tribes could only drink fresh water when they came to a fresh water source such as a lake or a pond. Sometimes there was no lake , river , or pond so the Native Americans became extremely dehydrated and that was another cause of Native Americans casualties.

As the Native Americans walked farther on the trail, times became harsher as the days became windier and the nights became colder. This caused the most amounts of deaths.  At first it was a friend, but then it became children and parents and other family members. Some smaller tribes lost less because their numbers were smaller and they were better prepared for the journey. Although sometimes it would not be that way and sometimes the smaller tribes would almost be wiped out because the deaths would have been more horrific the same as any other tribe but closer to being extinct.


How were the Native Americans treated on the Trail of Tears?

The Americans did not treat the Indians well at any time it seems that since we became an independent country. We became just like the people we were trying to be free from. During the trail the Native Americans were kept in order by the guards assigned to the trail and tribe. Some of the men keeping the Native Americans in order wished to grow cotton, on the lands that were recently inhabited by the Cherokees. Those were the men who would sometimes break the rules and end up hurting the Native Americans the most because they didn’t want them to try and take back the land. This caused mass conflict between the two kinds of people escorting them through the trail. And what would happen if a loved one passed away , you could not dig them a ditch to lay in. Anything of the sort and you would be shot! The Indians and the guards encountered many fights mostly with each other.


The Indians were not only harassed by the guards they were also tortured by mother nature. The Indians were starved and in a horrible state of mental health that they would of preferred death. It was not just one day or one week. This went on for 6 months! As a result the Indians died and it only went south from there. The cold winters got worse around the more elevated part of the country. During the cold winters the Indians could only rely on the gods and the small amounts of food they were being fed. On top of that if you could not perspire then you could not cool down. And near Oklahoma that was a big problem.


Why was it called the Trail of Tears?


In 1838 and 1839, as part of Andrew Jackson's Indian removal policy, the Cherokee nation was forced to give up its lands east of the Mississippi River and to migrate to an area in present-day Oklahoma. The Cherokee people called this journey the "Trail of Tears," because of its devastating effects. The migrants faced hunger, disease, and exhaustion on the forced march. Over 4,000 out of 15,000 of the Cherokees died. The Choctaws also lost several thousand people. 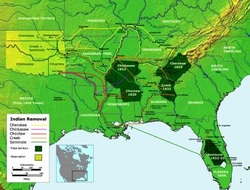 Trail of Tears:  Comparison between Cherokee and Choctaw Tribes

The Cherokee were one of the Five Civilized Tribes, so called because they were considered civilized by Anglo-European settlers during the colonial and early federal period. They adopted many colonists' customs and had generally good relations with their neighbors.

The Choctaws were one of the Five Civilized Tribes, so called because they were considered civilized by Anglo-European settlers during the colonial and early federal period. They adopted many colonists' customs and had generally good relations with their neighbors.

The Choctaw were a Native American people originally from the Southeastern United States (modern-day Mississippi, Florida, Alabama, and Louisiana). They spoke the Choctaw language.

The Cherokee were one of the first, if not the first, major non-European ethnic group to become U.S. citizens in the 1817 treaty with the government of the U.S.

In Worcester v. Georgia (1832), the US Supreme Court Chief Justice John Marshall ruled that American Indian nations were "distinct, independent political communities retaining their original natural rights," and entitled to federal protection from the actions of state governments that infringed on their sovereignty.  President Jackson ignored the Supreme Court's ruling.

In 1838-39 President Martin Van Buren ordered 7,000 Federal troops and state militia into Cherokee lands to forcibly remove them from their lands in the Southeastern United States to the Indian Territory (present day Oklahoma) in the Western United States.

The Choctaw were the first Native Americans forced to move under the Indian Removal Act of 1830. They negotiated the largest area and most desirable lands in Indian Territory.

By the 1831 Treaty of Dancing Rabbit Creek, those Choctaw who chose to stay in the newly formed state of Mississippi were one of the first major non-European ethnic groups to become U.S. citizens.

During their forced migration on the Trail of Tears, the Cherokee lost 4,000 Tribe members due to exposure to harsh weather conditions, starvation and disease.  The weather consisted of severe heat waves during the summer months and below freezing temperatures during the winter months.  Food was not readily available as they were removed from their homes and hunting grounds.   The Cherokees caught many diseases which were brought and sometimes intentionally spread by the European settlers including smallpox, typhus, measles, influenza, bubonic plague, cholera, malaria, tuberculosis, mumps, yellow fever, pertussis (whooping cough) and syphilis.

During their forced migration on the Trail of Tears, the Choctaw lost 2,500 Tribe members due to exposure to harsh weather conditions, starvation and disease.  The weather consisted of severe heat waves during the summer months and below freezing temperatures during the winter months.  Food was not readily available as they were removed from their homes and hunting grounds.   The Choctaws caught many diseases which were brought and sometimes intentionally spread by the European settlers including smallpox, typhus, measles, influenza, bubonic plague, cholera, malaria, tuberculosis, mumps, yellow fever, pertussis (whooping cough) and syphilis.